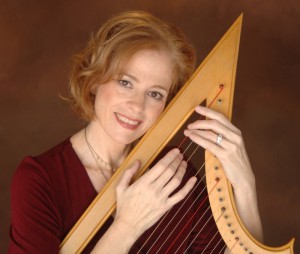 Childhood fascination with the harp blossomed into an exciting and successful career as a professional harpist and recording artist for this Houston native. As a self-proclaimed “crusader for music of great heritage”, Honey draws on her vast knowledge of early music history and her stunning virtuosity to bring alive for her audiences the incredibly beautiful music of the Middle Ages, Renaissance and Baroque eras.

Honey’s unique specialization keeps her in demand for lectures, concerts and festival engagements across the United States. With a vast and varied repertoire that includes familiar classical and popular favorites, she is a first choice for performances at social occasions as a soloist or with chamber groups.

Therese Honey delights and entertains her listeners when she performs on any one of her collection of harps, which range in size from the modern gold Concert Grand harp to the ancient Celtic harp.

Therese Honey is a specialist in Celtic and Early harps, with a background in classical pedal harp. Therese tours throughout the United States and in 1997 she performed at the 20th Annual Carolan Festival in Keadue, Co. Roscommon, Ireland. 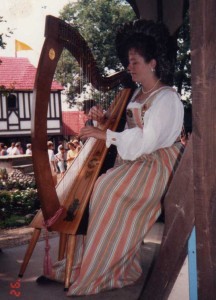 Therese performs early music in the Houston area as well as with the Texas Early Music Project (TEMP). She presents concerts of Medieval and Renaissance music on copies of historical harps and wire-strung and other folk harps of ancient design.

She has an active teaching studio in the Houston area and tours throughout the US as a clinician and adjudicator.

In addition to her private studio, Therese teaches workshops on Medieval, Renaissance and Celtic repertoire, arranging and style, and Harp Ensemble. She is a dynamic teacher who inspires and motivates her students to learn more about the harp: its technique, repertoire and history.